Debora Coty is an Occupational Therapist (B.S. From the University of Florida), a piano teacher, and a freelance writer. She’s also involved in the children’s ministry at her church (Bay Life Church) and is an avid tennis player.

One of her favorite books is Christy by Catherine Marshall. She read it nine times as a teenager and named her daughter after the title character.

Her father, Frank, and mother, Adele, made a career in the educational system. They brought up their two daughters under the guidance of the Lord and at a young age both Debora and her sister, Cindy, accepted Jesus as their personal Savior and Lord. As it turns out that simple yet heart-filled decision would flavor every aspect of her life.

Debora’s husband, Chuck, is involved in financial planning and is responsible for keeping this website up and running. So sqawk at Chuck if this site becomes out of date.

Her children Matthew and Cricket, have been a joy to raise. Matthew completed the MBA program at UCF and is currently employed at SunTrust Bank in Orlando. Cricket’s a Massage Therapist (LMT) and an Occupational Therapist (OTA) following in her Mom’s footsteps.

Debora began writing to fill the void when Cricket left for college. Writing has become a passion and that can be attested by the many hours she spends each week hammering away on her desktop or laptop keyboard. Matter of fact, her first historical novel, The Distant Shore, was released August 30, 2007 and within three months had climbed to the top of the VRPublishing best-seller list!

Debora has a real knack for getting across sound biblical concepts with a refreshing lightheartedness as attested in her monthly newspaper column entitled Grace Notes: God’s Grace for Everyday Living.

From Deb to you:

2008 was my Debbie Do-Over year. One morning I woke up and realized that if I lived to be 100, I truly was middle-aged and it was time to either do something about my appearance or quit grousing about it.

So I got Invisiline braces to harness my unicorn tooth and lost 40 lbs through Weight Watchers. Going from size 14 to size 2 was a real trip and I learned some interesting things along the way. Like it’s hard to find petite clothes that aren’t cut down to your navel and up to your eyeballs. All the crazy details are chronicled in my book, Too Blessed to Be Stressed.

And if you don’t feel precious to God when you’re large, you won’t when you’re small. How utterly wonderful that Papa God equally loves the chrysanthemum and the buttercup! 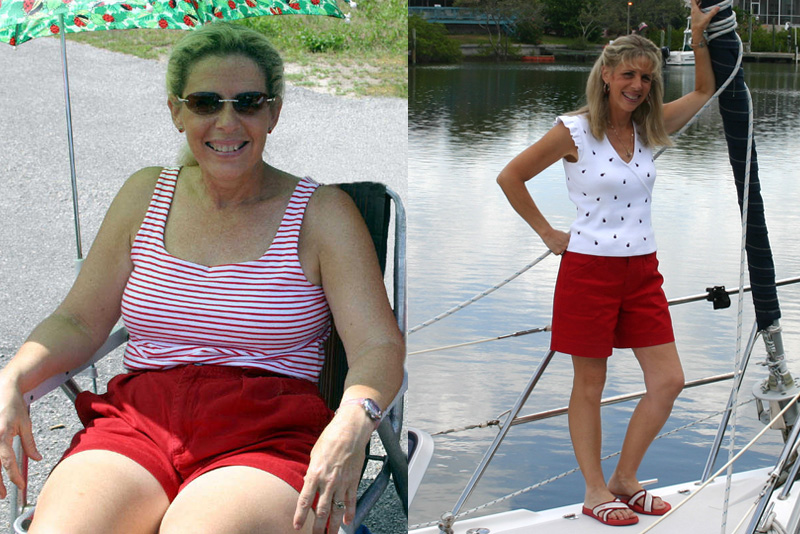 Getting to know Debora better…

Special thanks to Suzanne Woods Fisher for this interview found at http://suzannewoodsfisher.blogspot.com/

Debora Coty, an internationally published columnist and sought after speaker (Deb is a gifted humorist), entered the publishing world at mid-life. With a bang!

Q: Debora, you have written that you consider yourself a “late bloomer” as a writer. What do you mean by that?

A: The fertilizer didn’t kick in for a few decades.

I didn’t start writing until my youngest chick flew the coop; I was 45 and winding up a 25-year career as an occupational therapist and 20-year stint as a piano teacher. Not exactly recommended training for a writing career.

Q: How did you get started as a writer? Did you have specific goals in mind?

A: I was an avid reader growing up and always dreamed of writing an inspirational young adult novel like Christy by Catherine Marshall (I devoured it nine times as a teen). Christy had a huge impact on my life (The escaped hatchling referred to above is named…can you guess?…Christy!). I wanted to touch someone else’s heart and faith the way Christy touched mine. I recently ran across a list of “Five Things I Want to Do Before I Die” I’d written as an idealistic 16-year-old. Number three was “Write a book.” (Number four was “Jump out of an airplane” but I’m waiting until I’m 80 for that one.)

Alas, life, as life tends to do, intervened and college, marriage, career, and babies waylaid my plans. Then one day in the dentist’s office, I saw a magazine ad for a writing contest and God said, “It’s time.”

I think every writer needs goals. My original goals were to write two books (one fiction, one non-fiction) and publish one hundred articles within ten years. It’s been four years now and I’ve had over sixty articles published and have completed three books, so I’ve revised my first decade goals to two hundred articles and eight books. And a partridge in a pear tree.

Q: Do you feel that you have one genre that best suits you? Or have you tried other genres?

A: Um, yes and yes. My first book, a young adult inspirational novel, The Distant Shore, will be released this August by Vintage. My second book is a humorous inspirational women’s book, Smiles to Go Before I Sleep: Hugs, Humor, and Hope for Harried Moms.(My agent is pitching it to publishers as we speak.) My magazine and anthology articles started out as first person anecdotal accounts of God’s amazing grace notes in my life (grace notes are a musical device that aren’t essential to the melody, but add beauty, depth, and dimension for enrichment). When I took on a monthly humorous newspaper column, my writing took a definite turn toward the wild and wacky. I enjoy writing fiction but I believe my divine calling is creative humorous non-fiction (yes, non-fiction can and should be creative!).

Q: How easy (or how difficult) was it for you to get published?

A: Well, remember my brain was atrophied and menopausally unbalanced when I started! I wasn’t sure where to begin! I studied every “how to” I could get my hands on and gave myself a crash course in grammar, style, and punctuation. I hadn’t had English since high school and didn’t know a dangling participle from a dipwad. I thought those three little dots were called eclipses…

I also found an experienced writing mentor (a friend of a friend of a friend) in the inspirational magazine genre and we met for latte’s at a coffee shop monthly to share writer’s guidelines, leads, and tips. It was because of Austine’s patient guidance on how to appear less amateurish and more polished that I was blessed with ten published articles that first year. I eventually became more of a peer than a ment-ee and reciprocated by editing Austine’s work.

Austine even wrote an article about us called, “Why You Need a Writer Buddy” that appeared in the March/April 2005 issue of Writers’ Journal.

Q: What aspect of God do you hope readers take away after reading your articles and books?

A: My entire focus and reason for writing is to share the everyday miracles my heavenly father has performed in my life and to plant and water seeds of hope in the lives of other struggling believers who feel stuck in the muck of everyday stress. Even with mud between our toes, we can live that abundant life Christ promised in John 10:10 and come out the other end of the motherhood tunnel smiling!

Q: What do you most love about the writing life?

A: The terrific hours and outstanding pay. And the fact that nobody can look you in the eyes through your computer monitor and tell you’re lying through your teeth. Plus you can write with greasy hair and bad breath and your computer is never offended.

Q: What do you least love about the writing life?

A: The terrific hours and outstanding pay. It’s now 2 a.m. and I have two dollars in my wallet for lunch tomorrow. Does that tell you anything?

Q: What advice do you have for aspiring writers?

A: Stop! Stop right now! Stop limiting your potential by fear (Go on! Submit that piece!), low expectations (If God gave you the assignment to write, He will use your abilities to His glory beyond anything you can imagine), or lack of energy (“He gives strength to the weary and increases the power of the weak,” Isaiah 40:29).

Learn to view rejection simply as an occupational hazard. Persevere through all those rejection slips like jockeys deal with horse-poo. Step over the piles, wipe the nasty off your boots, and keep moving forward.

Thank you so much for having me, Suzanne – I’m a big fan of yours!