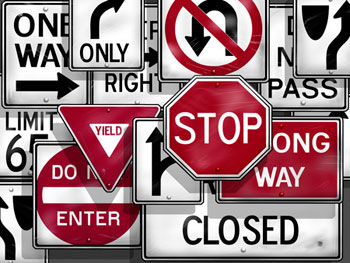 My stove jammed yesterday. I took it as a sign from God.

Actually, it was the metal drawer beneath the oven, the one in which I store my pots and pans. A pot in the front somehow flipped itself over in the middle of the night (how do they DO that – impish kitchen elves?), effectively blocking the drawer from opening.

After following Taylor Swift’s advice and shake, shake, shaking the silly stove until I was purple in the face, my moment of enlightenment occurred. Ah Ha! Papa God wants us to eat out tonight!

Well, far be it from me to disappoint the Almighty.

Really, aren’t we always looking for signs of one kind or another from Papa God? Don’t we beg for guidance with hairy decisions on a daily basis? Wouldn’t we LOVE to have a giant hand jot personal instructions for us in the sky?

But then, would we recognize Papa God’s handwriting if He did?

Reminds me of that scene from Bruce Almighty when Jim Carey’s character was driving down the highway praying for God to send him a sign. There, right smack dab in front of him, lumbered a big truck loaded down with street signs practically screaming messages in his face like, “Caution,” “Turn Around,” and “Wrong Way.

But to him, they were just part of the scenery. He didn’t recognize the handwriting.

I was watching one of those cheesy but quaint Hallmark Christmas movies the other night where a little boy was looking for a sign. His mama was in a coma after a car crash that killed his dad and he wanted more than anything to get his mom back. Meanwhile, our main adult character was going through his own miserable problems but somehow, through circumstances beyond his control, ended up in a Santa suit begrudgingly making rounds at the hospital, delivering teddy bears to the children on the pediatric ward.

As he entered the sad little boy’s room, the man couldn’t understand why the lad wouldn’t even look up at him. All the other kids had been excited to see Santa. He figured it must be the teddy bear. So he apologized for the lame gift and asked what the boy would rather have.

With tears in his eyes, the little fellow admitted that he only wanted a sign. Just a sign that his mama would one day come back to him.

Our reluctant hero suddenly realized that his next words would either make or break this child’s Christmas – possibly even his life. So his sense of responsibility shifted from just-do-what-you-must-and-get-it-over-quickly to think-it-through … this counts.

After flailing around a bit, the Santa impersonator’s eye caught sight of the star atop the large Christmas tree in the courtyard outside the boy’s window. The star. That’s it.

“Look at that star,” he told the poor heartsick child. “Whenever you need hope, just look at the top of a Christmas tree. A star was a sign to some wise men long ago of good things to come and it’s a sign to us today that everything is not as bad as it seems. Something good is right around the corner.” As he left the room, he glanced back and saw the bruised and bandaged boy staring longingly at the star.

Of course Hallmark can’t (or won’t) bring an overt Christian element into a secular movie, but I immediately saw the faith application. The wimpy fake Santa dude was right. We all need to look at the star. The one that hung over a tiny stable in a tiny town called Bethlehem. The one that proclaimed like an interstellar billboard that good news – world-altering good news – had indeed arrived in the form of a precious baby, the Savior of the world .

That star is our sign as believers: A fulfilled promise from Papa God. The assurance of His love. Our hope for today and our hope for tomorrow.

Too bad the doofus in the movie didn’t recognize the handwriting on the sign. But all turned out peachy-Halmarky-keen … the little boy’s mother woke up on Christmas morning and the man finally saw the light. The hope in the star’s light, really. And that’s what he needed most. Hope.

Hope is what we all need most, isn’t it?

So I’m hoping that my oven stays jammed just a few more restaurant dinner’s worth. Did I mention I’m pretty sure it’s a sign from God?