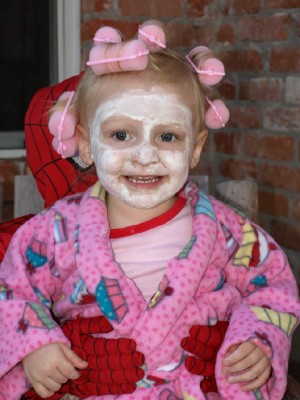 This revelation dawned on me during a God-smack moment the other day when Chuck entered my writing cave and performed his customary early-morning greeting. He pressed his balled up fist to his forehead and genuflected.

Lest you think we have some sort of kinky bondage thing going, let me ‘splain. No time. Lemme sum up (a nod to everybody’s fave flick, Princess Bride).

Since evacuating estrogen has recently morphed my 50-something hair into hay, I’ve had to install a pink roller in the front of my head over breakfast to make my bangs look more like real hair and less like a baby porcupine having a frizzy quill day.

At first, Chuck, stared with alarm at this hideous pink appendage assaulting his senses every morning. But then, as he has for the 36+ years of our marriage, he began to look for the playful side of an unpleasant situation. He developed this ridiculous salute where he creates his own forehead roller with his hand in homage to his queen and genuflects with the proper gestation due her royal hiney.

Or maybe that’s gesticulation and highness.

Whatever. It makes us both smile.

It’s become our secret handshake of sorts. Like we’re the only two members of an exclusive club. Anyone else observing would roll their eyes and shake their heads. Nobody gets us but us. Isn’t that the way it should be with two people who choose to grow old and weird together?

Despite what we think we know, seriousness is taken far too seriously. Especially in marriage. There’s enough gravity and solemnity in every other aspect of our life. Why not throw a little silliness glue into the relationship we hope outlasts them all?

So my BBFF (Blessed Blog Friend Forever) – what are some of your fifty shades of play? I’d love to hear about the silliness glue in your closest relationships (doesn’t have to just be marriage).