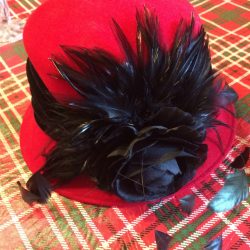 My feet began to ache but I persevered as I made my way through the crowded mall, searching for the perfect hat. (This is a never-ending quest for me; it’s like trying to find that elusive perfect purse – I’m beginning to think the creature’s existence is simply a wicked fable.)

At first, I thought the stares and raised eyebrows aimed my way were coincidental. Shopper after shopper flashed me the most dazzling smiles as we passed. What is this, Extra Friendly Day? I wondered.

But then after one particularly telling incident when the child I made eye contact with in the shoe department actually poked her mother and pointed to me (upon which they both grinned), I began to grow suspicious. What was wrong with my appearance?

It was when I caught my reflection in a display window that I realized wassup. During my rush-out-the-door, mentally distracted exit from home, I’d unwittingly donned mismatched earrings. Not subtle, tasteful studs, mind you … these were garish, dangling, color-clashing monuments to fun fashion madness that had no business bedazzling my head at the same time. 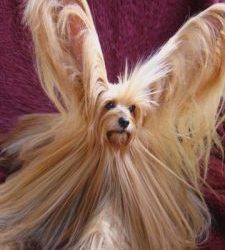 They were the pretentious, kicky kind of accessories you might wear on movie night with the girls when you intended to laugh so hard Diet Coke would geyser out your nose.

But you certainly wouldn’t wear both styles at the same time. In public. No time. No way.

I felt instant shame. Like I had failed some sort of fashion test. I’d been judged and found wanting. I reached up and removed first one, then the other testimonial to incredibly bad taste and started to hide them in my purse. Then I stopped.

Like a movie reel, the shining teeth and crinkling eyes of all those who’d smiled at me that morning flashed through my mind. That was something special, wasn’t it? Come to think of it, I’d felt warm and fuzzy bathed in all that unexpected good cheer from those friendly folks. I’d actually had fun shopping for a change.

So I put the gaudy decorations back on. And held my head high. No shame in entertaining people. Especially if it means bringing a smile to a face that might not crack another one all day long.

Maybe we really should have an Extra Friendly Day. What d’ya think? Which accessories in your closet would solicit unexpected smiles from total strangers? I’d love to know! 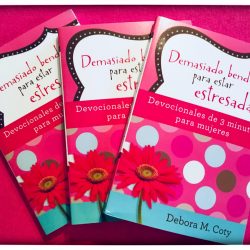 P.S. Won’t you rejoice with me?

Just found out Too Blessed to be Stressed: 3-Minute Devotions for Women will soon be translated into Portuguese and released in Brazil. It joins the Spanish version already circulating Central and South America and the islands. I’m loving all the letters from my new amigas in Paraguay, Uruguay, Puerto Rico, and Costa Rica.