Kisses For The Twit 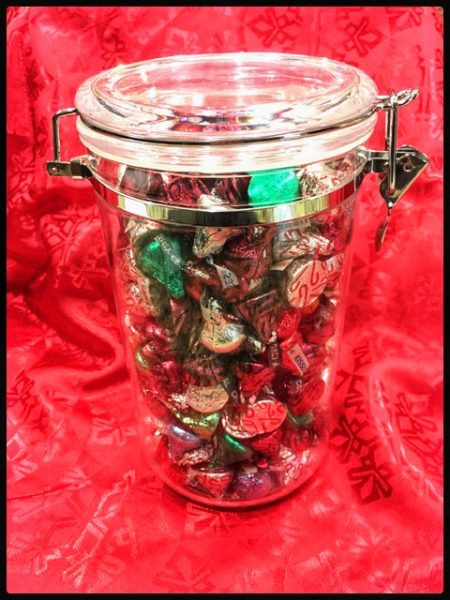 I was doing the headless chicken thing that I do during the hour prior to a speaking gig – rushing about to and fro setting up my book table, getting mic’ed, going over the program itinerary with the LIC (Lady in Charge), instructing my book table helper in my KISS (Keep It Simple Sister) bookkeeping system, trying to remember where I left my speaker shoes so I don’t have to deliver my message in red flip-flops. You know, the usual craziness.

Then some unusual craziness happened.

I happened to glance across the large banquet room toward the podium and small prop table from where I would be speaking (I had already set my stuff up so it was all in order and ready to go) and noticed a middle-aged man with his hand literally in the cookie jar. It was actually a candy jar – a sealed clear glass jar full of chocolate kisses that I’ve used for a guessing game with my audiences for the past three years.

It was now unsealed. And his grubby hand was groping around in it.

I instantly saw red. Blazing, rockets-bursting-in-air, fireworks red. Angry, rabid thoughts flashed through my head and collided with my teeth in their haste to exit my mouth:

Thankfully, I was able to corral these runaway responses before they fog-horned across the room, alerting all the scurrying-about, hard-working ladies about the devious fox in our hen house. One horrible thought suddenly presented itself to my bulging brain: What if that’s the church pastor? Eeek. But I found my little legs pumping like pistons to carry me closer to confront the cad anyway.

“Excuse me, what are you doing?” I asked without a shred of pretend grace. “You’re really eating my props? Those kisses are for a guessing game; I already know – knew – the correct number in the jar and now I obviously don’t.”

He looked no more distressed than if I’d informed him his daisies were blooming as he popped a heisted treasure in his mouth, crumpled the foil, and added it to the growing podium trash stash.

“Just subtract three – no, four – from your total,” he casually spoke, his voice slightly muffled because of the chocolate lump in his cheek. No embarrassment. No contrition. No apology. (And it turned out he was NOT the pastor, thank heavens.)

So what would you have done at this point, dear BBFF (Blessed Blog Friend Forever)? Truthfully. (You don’t have to feign righteousness with me, you know. We’re all here to grow together.)

My last blog post posed the question: How do we, as believers, react to rude/outrageous/disrespectful behavior?

Your answers were inspiring – I’m so blessed to have such mature and grace-filled BBFFs to help guide me (and all of us) on our faith-journey through this life. Admittedly, I have a long way to go before grace is my default response to stupicity (not a word but it should be).

I’ve shared this before, but I’d like to share it again with your indulgence. Because I suspect some of you struggle with response rage (1 to 60 in ten seconds) like I do, and I know BARFing will help you. It’s an anger management tool that has helped me for years – and indeed saved my hide in this very kiss mishap – to corral my runaway anger and honor the wise proverb, ” Keep your mouth shut, and you will stay out of trouble” (Proverbs 21:23 NLT).

So standing before my nonrepentant chocolate-scarfing offender, I knew I had  to BARF. And soon.

As I stared him down, well more like glared him down, he turned and walked away from my sacred, designated space (at least that’s the way I viewed it). I grabbed his abandoned kiss wrappers and bee-lined it to the women’s restroom. There I proceeded to:

I went back out, finished my set-up, and gave my speech. The guessing game went off without a hitch, just with 184 kisses in the jar instead of 188. No harm. No foul. Except that four women all guessed 184 and I only had one prize. (My offender ended up being a server at the luncheon with other men from the church and actually was a really nice guy. With an out-of-control sweet tooth.)

Granted, heisting chocolate kisses is a minor thing, maybe even silly. But at the time it was just as strong an anger trigger for me as if someone had stolen my purse.

We all have to deal with anger triggers daily – minor, major, and sometimes repetitive. Seems like a good idea to prepare before the trigger is pulled. And whenever we can, offer kisses to a twit. 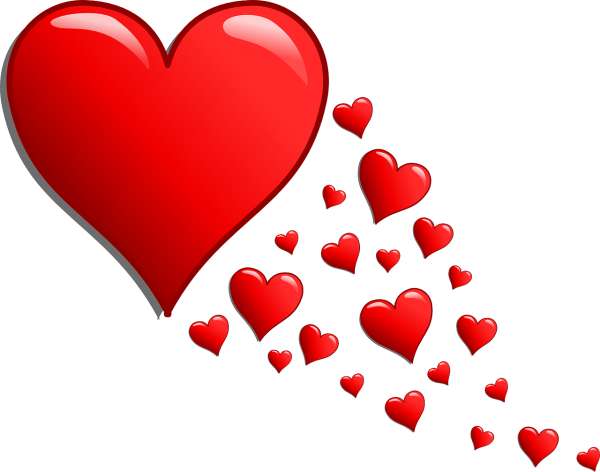 *Who’s up for another great giveaway? I hear an awesome Palentine gift package is in the works for Feb so stay tuned!