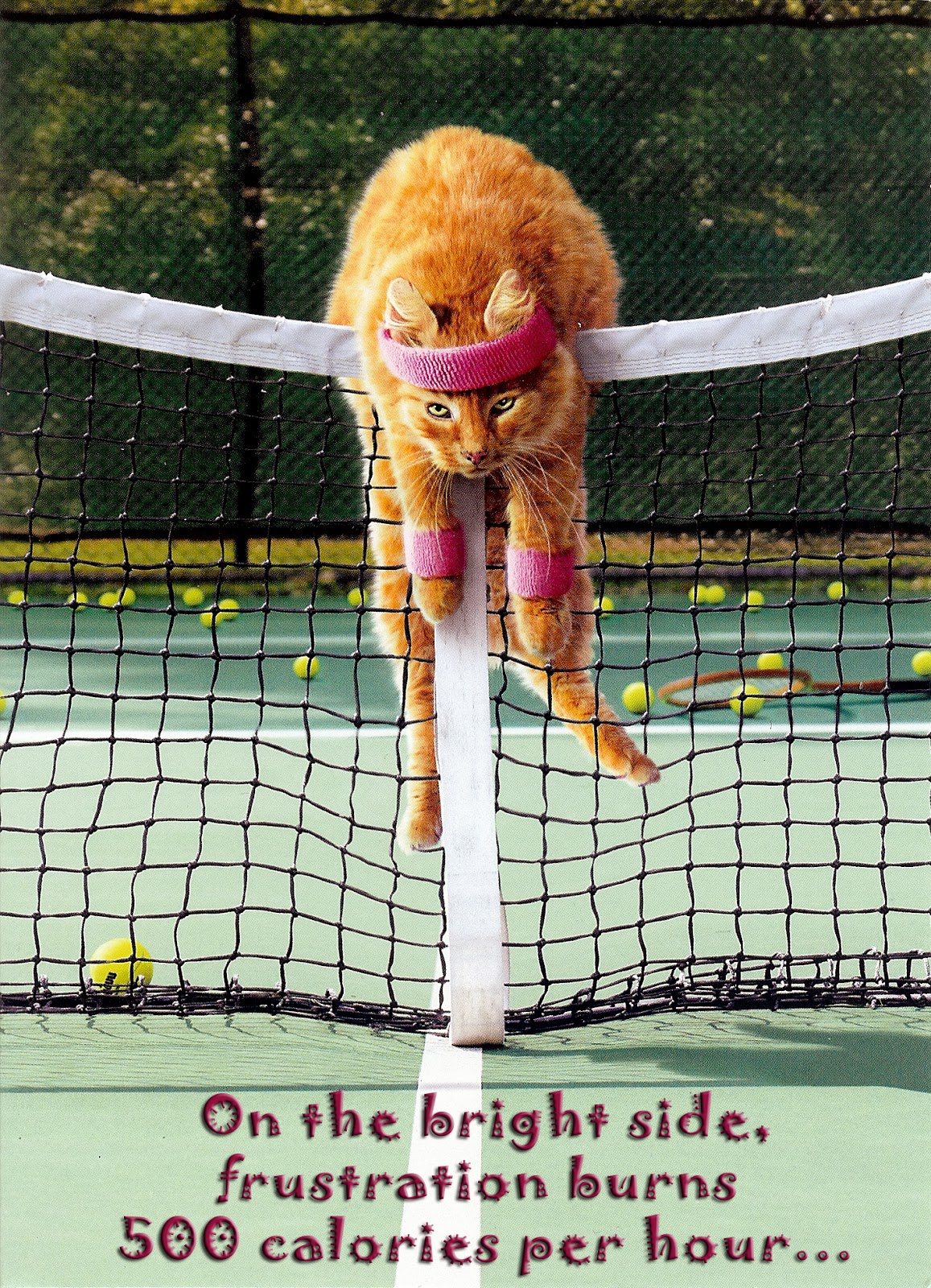 When I was a young high school tennis player, I dreamed of greatness … Wimbledon, The French Open, Arthur Ashe Stadium.

My grandmother used to tell all her little old friends that I was as good as that there Chrissy Evert.

The only caveat was that Granny had never seen me play.

But her vote of confidence went a long way in stoking my daydreams and keeping me out there sweating it out at practice.

Those were the days when coaches didn’t believe in water breaks – they thought it made athletes soft. The result was that I looked a lot like this feline sweetie on the right after every sweltering two-hour after-school practice.

Actually, I still look like that today whenever we go three sets in the two tennis leagues in which I participate. The ole gray tabby, she ain’t what she used to be.

I never did become a great tennis player, but I did become a memorable one, or so I’m told by my opponents, although I think they may be referring to my socks, which vary from wild red and pink hearts to psychedelic neon. To borrow a term from my writer friend Rick, if you can’t be revered, you can still be you-nique.

Some dreams just aren’t meant to be fulfilled. But other are. Those are the dreams that should never be forgotten.

This thought occurred to me the other day as I was studying the life of Joseph in the 37th chapter of Genesis. Joseph had a dream. As the youngest of eleven sons, he dreamed that his father and brothers would one day bow down to him. Then problems arose. Major obstacles. He was stripped, ridiculed, and sold into slavery far, far away. It was a no brainer that he would never see his family again.

That dream must have sure seemed stupid while he toiled away as a slave in a foreign country. While he endured imprisonment year after year for something he didn’t do. While he kept getting older, kept hoping, kept trusting for God to exonerate him.

And then, as irony would have it (don’t you LOVE Papa God’s surprise ironic twists in our road?) it was a dream that bailed him out of jail and kick-started his new life as ruler of a nation of which he wasn’t even a citizen.

I can’t help but wonder if Joseph thought about that first improbable – no, impossible – dream between the time he was inaugurated as Egyptian second in command and when his brothers finally arrived to beg and grovel before him. Just as God had predicted. Just as Joseph had imagined. You can bet he thought about it the moment his the faces of his brothers swept the floor in a low, humble bow.

He was so ripped with emotion, he couldn’t speak. His dream had become reality.

I’m so very glad that Papa God still makes dreams come true today, aren’t you? Maybe not flimsy unrealistic dreams like whooping Serena Williams on a sunny day in Melbourne, but dreams like being cherished by people who love you. Or becoming Papa’s hands and feet on earth. Or finding and embracing true joy in this life.

Or like Martin Luther King Jr.’s dream of equality and freedom for all mankind.

These are the dreams that should never be forgotten.

What, dear friend, are your dreams?