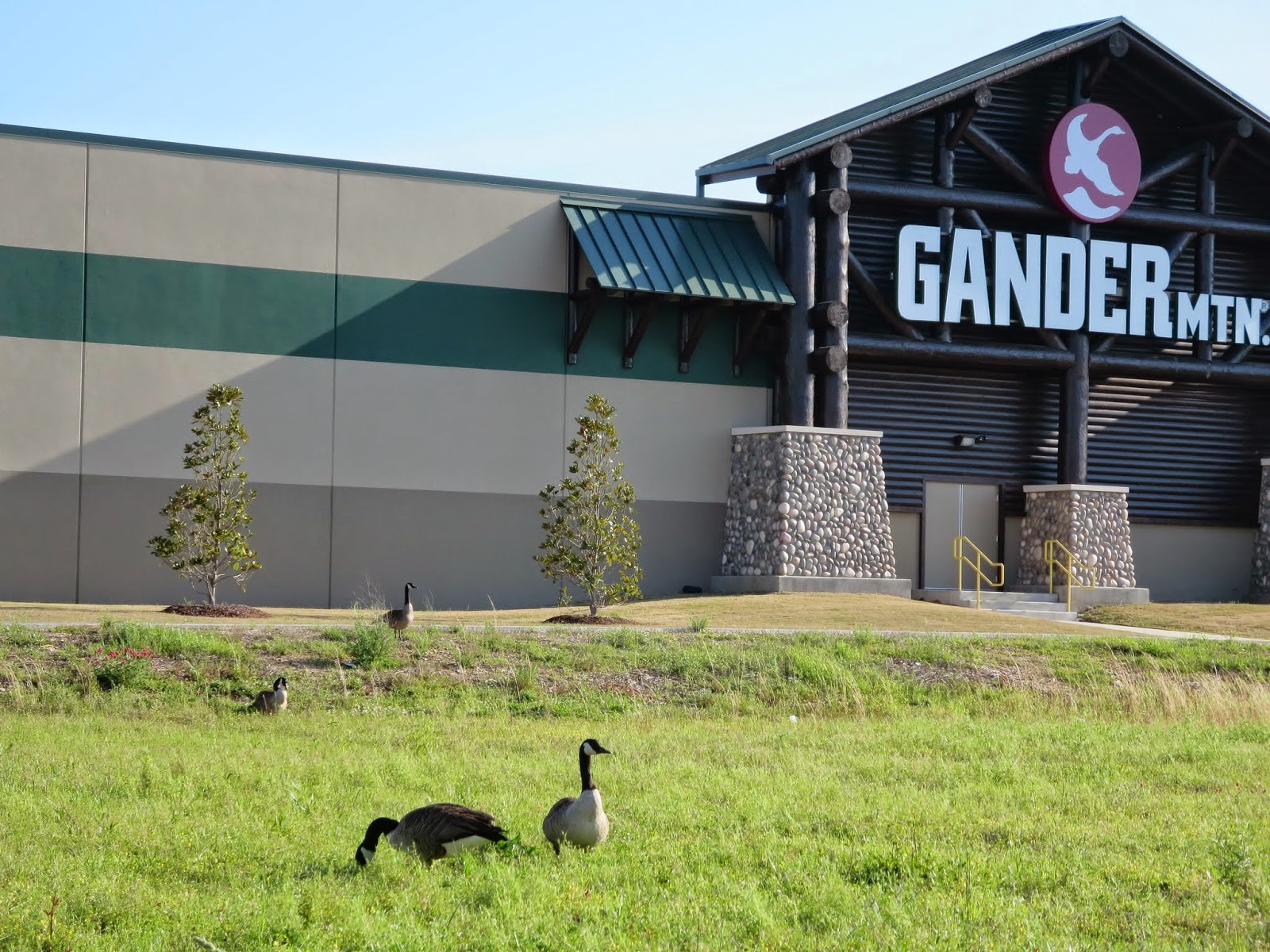 While traveling to a wedding in Alabama last weekend, Chuck and I stayed at a motel in a newly developed area on the fading border between urban and rural.

Next to our motel was a gigantic big box-like store that I’d never seen before: Gander Mtn, known as your firearms superstore.

Now I am not a hunter; I’m a weeping heart who would rather not think about where my steak comes from. Illogical as it may be, I refuse to acknowledge that my bacon once had legs. I cannot fathom raising my own fried chickens (although my granny in north Georgia certainly did and used to entertain us grandkids with stories of wringing the necks of her hens she’d raised from egghood when meat was sparse in winter and Sunday dinner rolled around with a mess of hungry mouths to feed).

When we pulled in to the motel, I was a bit nauseated by the huge guns-r-us store with its goose-in-midflight logo. Poor little wild geese, I thought. At least they can fly away – gives them a fighting chance.

Then to my horror, I saw them. Two pairs of long necked geese hanging out right there at the very place intended to be their demise. A newly equipped hunter would practically trip over them as he exited the doors loaded down with his brand new ammo.

What’s wrong with you? Get away from here. Far, far away! There’re ponds everywhere safer than this. Here is where you die.

But not only did they hang out in the field by the store all day, the next morning as I took my 6 a.m. prayer walk, they casually strolled right into the get-your-killer-gear-here parking lot like they were greeting customers or something.

I couldn’t believe it. What was wrong with these dense birds? They have everywhere in the world to choose from and they park themselves smack dab in the middle of harm’s way.

So like the fix-it gal that I am, I ran at them, arms flailing, yelling, “Shoo! Leave while you can! You don’t know it, but staying here will be the end of you!”

Did they listen to reason? No. Like a synchronized swim team, they stretched their wings wide and raised their long necks tall and honked and squawked at me like I was the one out to harm them. They were ready to defend their poor choice to the death. One of the riled up ganders rushed back at me and chased me halfway back to the motel. (Angry geese are a scary thing, let me tell you!)

I even dreamed about those dadgum geese last night. In my dream, I tried and tried to make them see the folly of their choice and fly away. But I never could. All they did was attack me and entrench themselves deeper into defending their territory, which wasn’t really theirs at all.

It was their enemy’s territory. They just couldn’t see it.

And when I awoke, fitful and frustrated, I knew Papa God was making a statement through my dream. I’ve spent the morning considering which areas of my life I’m a sitting goose. I’ve identified several and I’m still counting.

How about you? Are there any sitting goose places in your life?

Places you don’t perceive as dangerous so you stake claim in enemy territory. You park yourself smack dab in the middle of harm’s way as Satan raises his shotgun and takes aim at your heart. 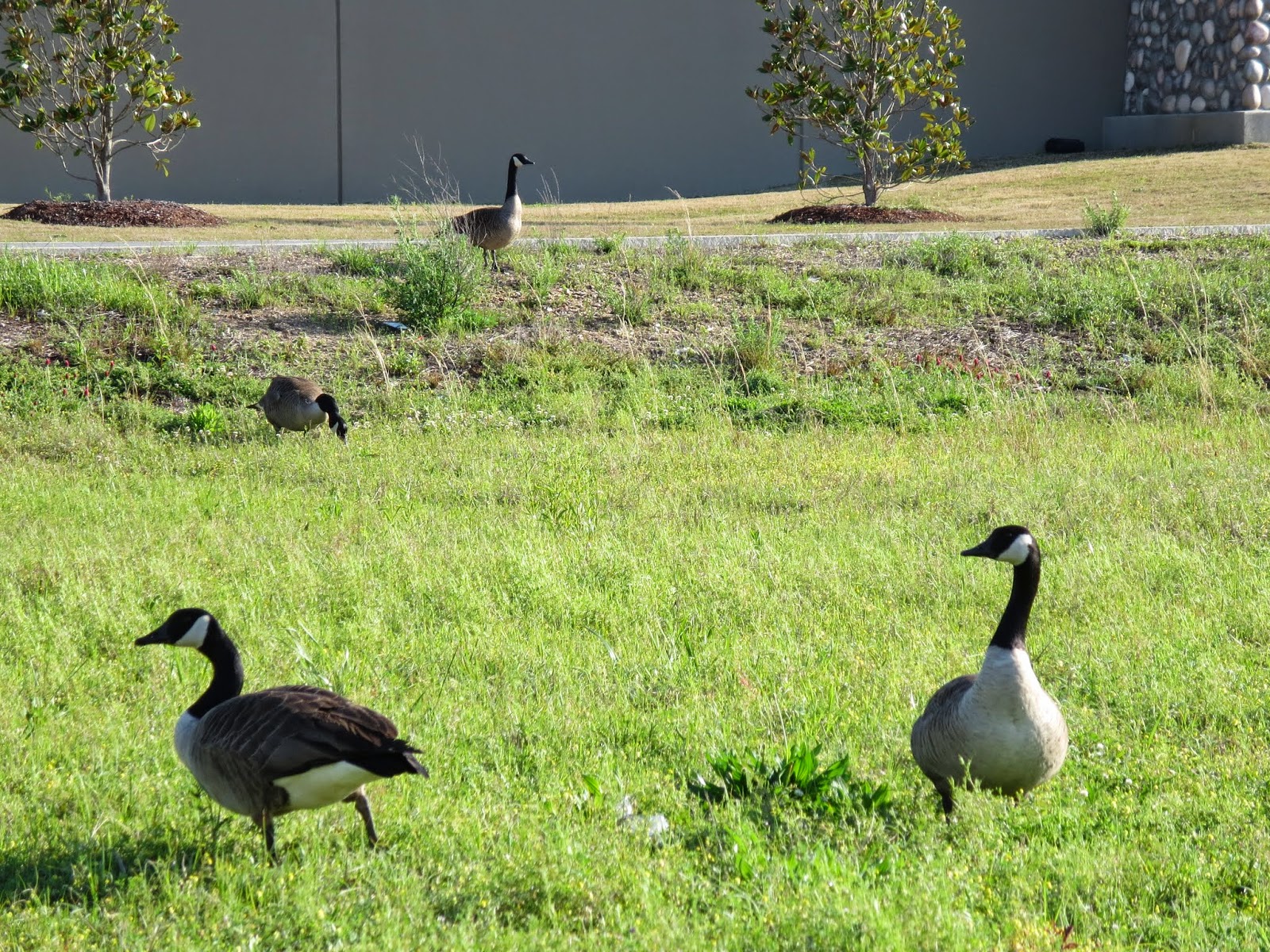 And when people who see the bigger picture try to shoo you away, to warn you that staying there will be the end of you, you’re ready to defend your poor choice to the death. You ruffle up your feathers and honk and attack right back at them until they leave you alone.

Alone to slide back down the slippery slope of that customized sin you thought you were strong enough to withstand. Alone to face the consequences of your poor choices. Alone in your regret.

Okay, so we’re all sitting geese at one time or another. Such is sinful human nature. That’s the bad news. The good news is that we can fly away to a better, safer place. We just have to choose to do so. And Papa God’s got the perfect pond in mind for each of us.