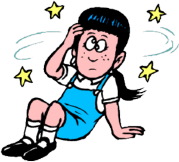 Wish I knew what causes my ding dang vertigo. Drives me batty.  Heard of it? The Tilt-a-Whirl from Hades. The hangover that isn’t. The devil’s last laugh.
Yep, vertigo is wicked all right. The world spins topsy-turvy out of control with every movement of the head. Or even eyes. It’s like you just rolled off a merry-go-round after being shoved round and round by a 250-pound linebacker.
Only it doesn’t stop after you get off and stagger around the playground.
This bout hit me the day we returned home from our beach week. I’d forgotten but Spouse reminded me that I got vertigo last year during our annual Daytona  week too. Go figure. I wonder if it has something to do with sand. Or glare. Or shrimp. Those are the things I do in Daytona that I don’t do at home.
Hmm. I suspect it’s the cosmos’ way of telling me not to wear bathing suits.
Maybe it’s hereditary. My father suffers with it too, more frequently than me. We both take Antivert, which helps but doesn’t cure it. At least with the medicine you can pseudo-function without throwing up every time you rise from a chair. But walls still have a way of jumping out and whacking you in the shoulder when you try to traverse hallways and the sidewalk still swerves away from you when you walk the dog and you end up in somebody’s shrubbery pretending that you’re looking for Rover’s lost ball.
I recently found in my possession 1940-era British medical literature regarding vertigo that warned, among other clever things like “make sure your spectacle prescription is up to date,” that it is a very bad idea to walk along unlit stony paths late at night during a dizzy spell … you might end up in the ditch. In which case you may well invoke a disgruntled bobby to escort you to the loo or worse, the slammer, under the erroneous impression that you’ve visited one too many pubs.
Dear me. Guess I’ll just have to curb my late night unlit stony path hikes.
The brochure also said activities that require rapid side-to-side righting movements of the body and head are good therapy … example: tennis. The risks, however, include falling flat on your face when you look up to hit your serve. Or impaling yourself on the back fence when you run after a lob.
Harrumph. Mere hiccups to true tennis addicts like me.
I’ve actually played tennis – more than once – in the throes of a vertigo episode (you can probably only understand this if you’re another full fledged tennis junkie). It’s kind of an out-of-body experience. Gives new meaning to the term “dizzy blonde.”
Why, you wonder, would anyone subject themselves to abject humiliation and certain defeat playing a competitive game with her head screwed on sideways? Um, I dunno. I suppose addiction is the operative word here.
It wasn’t really that bad. Aside from only winning two games in two sets, the worst part was following the ball. Back and forth. Back and forth. Whack. Whack. Whack. By the time my already spinning eyes (a Vertigo symptom called nystagmus) could hone in on that little yellow sphere suddenly appearing just beyond the tip of my nose, the rest of me was flopping all over itself trying to remember how to be coordinated enough to connect my racquet with the ball.
You feel like a marionette being operated by a giant invisible hand hovering over the court. And the hand’s got a nasty twitch.
So you go home and take another pill.
Unfortunately, a side effect of Antivert is an anvil in your skull. It’s what I call the dead meat syndrome – meaning you can’t think clearly and only want to lie on the couch all day trying not to draw flies.
There’s no good way to sleep. I usually end up propping myself upright in bed in a sitting position and sandbagging my head on all sides so it can’t move. This doesn’t lend itself to rolling over once you’ve finally lost consciousness, which tends to pitch you right out of bed with arms flailing as you either blacken Spouse’s eye or send the bedside lamp flying.
Oh, you can be proactive if you choose. The vertigo exercises (mostly weird head/body positioning movements to dislodge stuck inner ear crystals) do help Daddy although they merely make me vomit. Even thinking about them now sends a wave of nausea through my gut. Rather like hanging upside down from the mast of a ship when you already have raging seasickness.
It’s enough to make me never, ever eat shrimp again. Just in case.
Copyright Your Blog Name 2012 at DeboraCoty.blogspot.com