My friend’s mom passed away this week. The funeral is today, over an hour’s drive from my home. Should I go?

I have an appointment on my calendar for this afternoon and a work to-do list as long as my arm. Leaving would mean loss of income. Is this wise?

I’m tired. Bone tired from a crazy-busy week, no, make that month, on top of restless nights with too little sleep.

The price of gas just went up again.

I had no personal relationship with the deceased. I only met her twice. Ever.

I hate the idea of sitting around with a bunch of hurting, weeping people, having no way to comfort them.

Besides, no one will even notice if I don’t show up.

So am I going to drop everything, waste the day, and attend the funeral of this woman I don’t even know?

You bet I am. I am because of the actions of someone 45 years ago.

I was 14 and my grandfather had just died at his home in Waycross, GA. I had never seen my parents in such a state of grief before and I felt overwhelmed by the viewing that took place the night before the funeral. The shock of seeing living, breathing Granddaddy dead – my first time ever; having to say good-bye to a cold corpse in a coffin; standing for hours on end to greet people I’d never seen before as they came and went, paying their respects.

My mother’s tears. My father’s pain. It was awful. Awful.

And then the morning of the funeral, there they were. I couldn’t believe my eyes. My heart leapt; my lungs found new air. I found myself smiling through my tears.  Amidst the sea of strangers, there – like magic – appeared the warm, familiar, caring faces of our next-door neighbors from home, Mary and Joe Gissy.

We weren’t expecting them. But they’d gotten up before daybreak and driven the two hours from Starke, FL, to lend their support. To show us they cared. Just to be there for us.

I watched my parents light up like stars on a cloudless night. I could see them drawing strength from the mere sight of their friends, who had gone above and beyond to simply show up. To offer their presence. 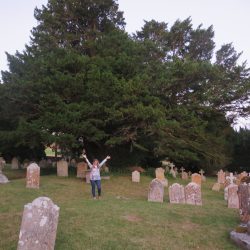 Mary and Joe Gissy became my role models for how to love on your grieving friends shaken to the core by the death of a loved one. I’ve tried to follow their example my whole life. And today will be no exception.

So I’m going. Regardless of all the reasons not to. Because compassion trumps reason every time.

How about you, my friend? Is there someone you feel led to go above and beyond to simply offer your presence to this week? Maybe you can’t overtly help them in any way … but you can be there.

Trust me, it will mean the world to them.