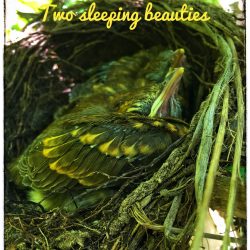 I was traipsing through the deep woods of the Smoky Mountains when I saw it. Something completely out of sync with this beautiful Cathedral of Papa God’s Creation. A plastic bag, the kind a newspaper comes in, was apparently stuck in the branches of a tall rhododendron, one end flapping in the breeze like a kite tail.

Now how in the world did that get way out here?

Anger started bubbling down in my innards toward mankind in general and in specific, toward the moron who carelessly tossed his trash out where it could blow around and pollute this lovely paradise of nature.

I worked my way through the underbrush, intending to pull down the offensive litter and stick it in my pocket for proper disposal later. Reaching up to give the plastic bag a jerk, I noticed that it was not just stuck on a branch, it was skillfully woven onto it.

A mama bird had used the littered bag to line her nest; it was braided into the pattern of twigs and moss comprising the nearly hidden nest wedged into the foliage. I raised to my tippy toes and leaned in to see two baby birds sleeping peacefully within, all warm and cozy, thanks to the clever plastic bag insulation.

An awww escaped my lips before I could stop it.

With the intrusion of my head into their living room, both sets of little eyes popped open and studied me. One confused but optimistic little fellow apparently decided to try his luck and opened his wide gaping mouth, hoping for lunch. 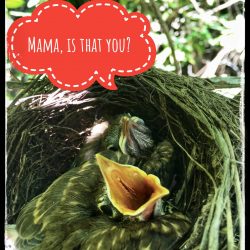 Having no worms on me (only a few ticks), I begged an apology and retreated quietly. My mother’s heart melted right on the spot.

On my hike back toward civilization, I continued to stew about the pollution we people inflict on the other inhabitants of this one and only Earth Papa God has entrusted us with. The news is full of horror stories: beached whales with bellies full of discarded plastic containers and hypodermic needles; emaciated pelicans with beaks tightly wound with fishing line; woodland animals dead from drinking water laced with discarded antifreeze.

It’s enough to boil your guts.

At least this mama birdie had found a useful purpose for this instance of pollution. Something bad was made good. Helpful. Redemptive.

I like that word – redemptive. It’s what Jesus did on the cross … He made something bad, good. That something would be you and me, polluters who can’t save ourselves from the sinful natures that rule us. So He, the only perfect person who ever lived, redeemed us by his own blood.

So in the midst of this imperfect world of ours, when bad so often seems to snuff out good, I was filled with gratitude for redemption. And a hefty helping of awe with the awww. 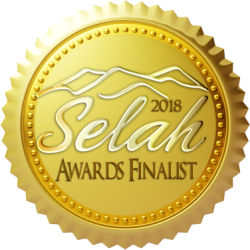 P.S. If we’re already Facebook friends, check out the heartwarming video of the redemptive nest and its occupants that I posted on my wall. If we’re not yet friends, let’s do it!

P.S.S. Keep an eye out for the brand new giveaway that’ll be in my next e-newsletter (you can subscribe at Deboracoty.com if you haven’t already).