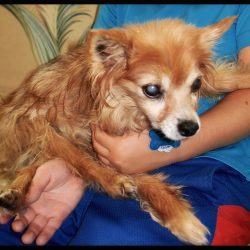 I mourn today. And I just can’t seem to stop my eyes from leaking. I lost one of my heroes a few days ago … five pounds of solid heart. His name was Rocky, short for Rachmaninov (he was a Russian toy terrier). He was 13.

I know you understand the hollow ache. Which of us hasn’t grieved the loss of a furry member of our family who made an inversely unproportionable HUGE impact on our lives?

So today, in honor of the tiny, yippy, ankle-biter and loyal lap-cuddler who actually belonged to my daughter but came to live with Spouse and me three years ago upon the birth of my daughter’s twins, I’d like to share for perhaps the last time, the incredible story of Rocky’s heroic moment of self-sacrifice that crippled him for the rest of his life, first shared in my book, Fear, Faith, and a Fistful of Chocolate. *(Hang tight, my friend – there’s a BIG announcement at the end of this post!)

This is not a sad story, no, not at all – it’s a victorious story of courage. Of overcoming debilitating fear in the name of something greater. Something that Rocky was able to do when it mattered most. Something that I aspire to do too. And that’s what makes him my hero; he showed me how.

The thud of hurried footsteps pounding the cabin’s pine floorboards awakened me with a start. It was early – far too early for anyone to be up. My daughter Cricket, son-in-law Josh, and their five-week-old baby, Blaine, had accompanied me on a getaway to our Smoky Mountain cabin, and the early chill alone was enough to keep you snuggled in your quilt.

Somewhere in the house a door slammed. What was going on?

Suddenly, loud, panicked voices rent the darkness. As I jerked to my feet and hit the floor running, my frantic heart collided with my ribs and all I could think was, The baby! Something’s happened to the baby!

But there, standing by the wide-open front door, yelling and stomping with all his might, was Josh, holding a perfectly fine but wide-eyed baby Blaine.

Confusion muddied my brain. Our remote mountain cabin is surrounded by dense woods on all sides. What in the world was happening in the small clearing we called our front yard?

All at once, Cricket burst into the house, carrying a squealing, wriggling, blood-soaked fur ball. Dirt streaked Cricket’s pajamas and her eyes welled with tears as she rushed toward he kitchen sink, trailing splotches of sticky blood on the floor behind her. I realized with a pang that she was carrying Rocky, their five-pound Russian toy terrier. As we worked to clean his wounds and assess the damage, a strange story emerged.

Josh had risen at 5 am to feed baby Blaine his bottle, and Rocky, having accompanied them to the living room rocking chair, curled himself up at his master’s feet. Then something suddenly raised Rocky’s hackles. He jumped up and began yipping at the door. Josh, in his drowsy state, thought Rocky simply needed to go potty outside, so he got up and opened the front door.

Now at this point you must understand something important about Rocky. We’re talking about a full-grown dog the size and temperament of a dwarf bunny. His own reflection renders him lily-livered. Everything intimidates the little guy. He’s terrified of all animals and people who venture anywhere near him. I’ve seen him hightail it away from an earthworm, I kid you not.

So that fateful morning, when Rocky, the king of cowardice, detected strange forces that he apparently considered a threat to his human family, he somehow dredged up the courage to race out the door, down the deck steps, and straight into the deadly jaws of a pack of coyotes.

Although only the silhouettes of the large predators were visible in the misty darkness before dawn, the vicious, snarling sounds of the attack were horrible. Josh, who didn’t dare enter the fray with the baby in his arms, could only stomp and yell from the doorway in hopes of scaring them away.

Cricket was rousted from her bed by Josh’s shouts and flew outside. At her approach, the coyotes skittered into the woods and our brave little hero was left bleeding in a heap of fur and bones. The exact imprint of upper and lower teeth from a large jaw was embedded in his back and belly.

When we later asked the veterinarian who treated Rocky if he saw many coyote attack victims from the mountains, his chilling reply was, “No. There’s usually no victim left to see. Coyotes typically snatch their prey and run, even when they’re being chased or shot at; nothing will stop them. It’s completely uncharacteristic that they dropped your little dog before he was ripped to shreds.”

Although he’s not human, Rocky definitely has feelings. Yes, Rocky has fears – real, horrifying, heart-pounding, wet-your-pants fears – just like us. Fears that often overwhelm and incapacitate him. Just like us.

When our fears confront us, we face the same choice little Rocky did: fight, flight, freeze, or freak out. Which option will we choose?

Will we take off running willy-nilly without a plan except to be anywhere but here? Will fear immobilize us, disabling our ability to make decisions or think clearly? Will we simply scream and cover our heads until help arrives? Or will inexplicable courage rise up within us  – even if we’re small, have sweaty paws and a liver that quivers at an earthworm – and empower us to put up our dukes? To take on a fight even when the odds are big-time against us?

Post Script from Deb: We were blessed to have Rocky with us for seven additional  years after the coyote attack and we’ll forever be grateful for Papa God for His grace. I miss the little guy so much, but I pray that we humans learn the lesson Rocky was sent here to teach us: “True, they can kill you, but then what can they do? There’s nothing they can do to your soul” (Luke 12:4 MSG).

Do you have a Rocky in your life-experience, my friend? I’d love to hear your story.

On a happy, happy note, CONGRATS to the winner of my first Blessed Mom Giveaway: Carol Maldonado!

Carol’s name was drawn this week to win the first fabulous Blessed Mom Prize Package in honor of my new book, Too Blessed to be Stressed for Moms, but on Aug 29, another name will be drawn for the second Blessed Mom Prize Package and it could be yours! The contest is cumulative so all those who have already entered have a chance to win the next awesome prize package … and the next! The giveaways will continue well after the Sept 1 release date of Too Blessed to be Stressed for Moms.

HUGS to you, my sweet BBFFs (Blessed Blog Friends Forever) for supporting my books!