If you’re a faithful BBFF (Blessed Blog Friend Forever), and I do hope you are, you may recall that at the beginning of this year, I had to say good-bye to not only my beloved father, but also to my faithful companion Fenway and my granddog Rocky (who had been living with us for several years), all within a few weeks of each other.

It was pretty heart-wrenching to be sure.

So for the past three months, I’ve been praying that Papa God would give me a little fuzzy friend to love. My prayer was simple: Please send a little buddy who needs me as much as I need him.

My other wishes (not exactly stipulations) were that it be a small dog, less than ten pounds (easier for me to cuddle!) and that he’s laid back and gets along well with kids (I have four grands who will be in his face).

I preferred young but not necessarily a puppy – less than two years would be ideal so he was past the chewy, barky, unhousebroken annoying puppy stuff. A female was fine, although I’ve only had male dogs for the last 25 years so in my mind its always a “he.”

To do my part in helping God along (don’t we always try?) I visited breeders galore, rescue sites, dog pounds in several different cities and even different states, and many friends (thank you!) put out feelers and prayed with me for just the right pooch.

I looked at dozens and dozens of delightfully slobbery faces. Cute dogs, adorable even. Dogs who would’ve made wonderful companions, I’m sure.

I firmly believe that Papa God’s there, He’s aware, and He cares about even the smallest details of our lives, so I’d determined to wait on the Lord to make it clear which was His choice for me. I felt sure that when I met the right one, I would know.

So I waited. And waited. And believe you me, it wasn’t easy. I was ready to take on a new little four-legged lover by the first of February.

Then March passed and April rolled around and my arms were still empty. Sigh. Waiting on the Lord is SO hard, isn’t it?

And then (you knew this was coming, didn’t you?) last week one of the animal rescue ladies I’d left my name with called. They had a little 8-pound, 18-month-old male stray who seemed to fit the bill; would I like to come and see him?

I’m not sure she had hung up the phone completely by the time I started knocking on her door.

She brought this little fellow out and placed him on my lap. He was not handsome. Nope. His ears were a different color than the rest of him. He had this weird porcupine fur and strangely elongated body that didn’t fit his head; she thought it was perhaps due to a wire-haired dachshund in his heritage. The other half of his geniology was a complete mystery.

But to be honest, I barely noticed all of that because all I could see were his eyes. His big beautiful brown eyes and brow furrowed with concern. The first time I looked down at him, it took my breath away. There were my daddy’s eyes looking back at me with that same familiar expression I’d seen on his face a thousand times.

My own eyes welled with tears. I knew. And I think he did too.

In fact, that little dude did nothing the whole time I was there but sit happily in my lap and gaze longingly into my eyes. It felt like we’d known each other forever and had finally met.

So I brought him home for a 24-hour trial. My worries about his kid-skills were completely unfounded; the grands stuck to him like flies on honey. And he was as mellow as a May morning.

Mercy, if he was any more laid-back, he’d be comatose.

And so little Yaz came to live with us. Unless you’re a diehard Boston Red Sox fan (like Spouse), you won’t recognize the nickname of the great Carl Yastrzemski (fans called him Yaz), my husband’s fave baseball player of all time. When Chuck and I first met in college back in 1975, I had never heard of Yaz (ole silly me – can you imagine?), so our courting days were full of fond memories of Chuck trying to teach me to say “Yastrzemski,” which I never could wrap my tongue around.

So “Yaz” is sentimentally special to us. And it seemed like a fitting follow-up to our last dog, Fenway. We even got Yaz a little Red Sox collar of his very own.

He’s still not handsome. Or even cute. So please don’t feel that you need to say he is (our neighbors who meet him usually say something like, “Oh what a cu … what a sweet little dog!”). He favors his weasel ancestor a smidge too much.

He is, however, a very special answer to prayer and so in my eyes he’s pretty perfect.

Hey, we have identical hair – not only the same color but also the same porcupine texture. Quills are us. And he is my kindred spirit about chocolate (he snuck into the Easter chocolate his second day here but managed to live through it).

Our candy dishes are now canine-inaccessible and choco-free. Sadly, Yaz’s poop will no longer smell like Hershey’s kisses. Way too bad about that.

Say, dear BBFF, when was a time in your life that you waited on the Lord for an answer to prayer? How did it turn out? I’d love to hear about it. 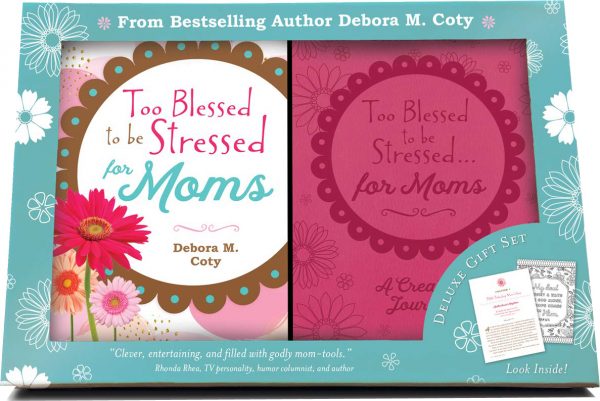 P.S. My Spring Fling giveaway is coming tomorrow! You’ll find details on Wed’s e-newsletter (be sure to subscribe if you haven’t already at my website DeboraCoty.com). This one features my brand new, hot-off-the-press

Too Blessed to be Stressed for Moms gift set and is gonna be a doozy!