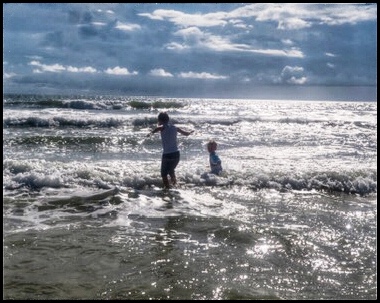 In Writer World, one of the basic guiding principles is, “show, don’t tell.”

The point is to not simply tell your reader that this scene takes place on a beach, but to enable her to feel the ocean breeze tickling her forehead, to smell the brine, to see the mighty crash of the waves on the shore, to hear the plaintive cry of gulls circling overhead, and to taste the tang of salt on her tongue.

Words can be empty shells, but action, now action brings the unseen realm to life. From simple letters grouped into words spring forth mental images and from those images, emotion based on experience. Emotion. Yes, emotion makes things happen.

And it’s a good principle to apply to real life too, as demonstrated recently by my friend Cheryl at a job interview. Cheryl had applied for a laboratory supervisory position, for which she was experienced and well qualified. But the Big Wigs interviewing her didn’t know that; not really. All they knew were the words blaring up at them from her referrals, telling them she was innovative. Assertive. Fervent.

Excellent characteristics, sure, but without action to back them up, they were just words. Empty words. Impotent words.

As Cheryl entered the facility and was being escorted by the secretary through the laboratory to the Big Wig office, a voice pitched high with terror called out, “It’s back!” And all the lab personnel in the vicinity abruptly fled in a mass exodus out the back door.

“What’s back?” Cheryl asked the secretary, whose eyes had grown wide as her gaze darted left and right. She finally lit on an impressively large green-gray scrub lizard in the corner.

“The lizard,” whispered the secretary, as if reduced volume could suppress the lurking, evil monster. 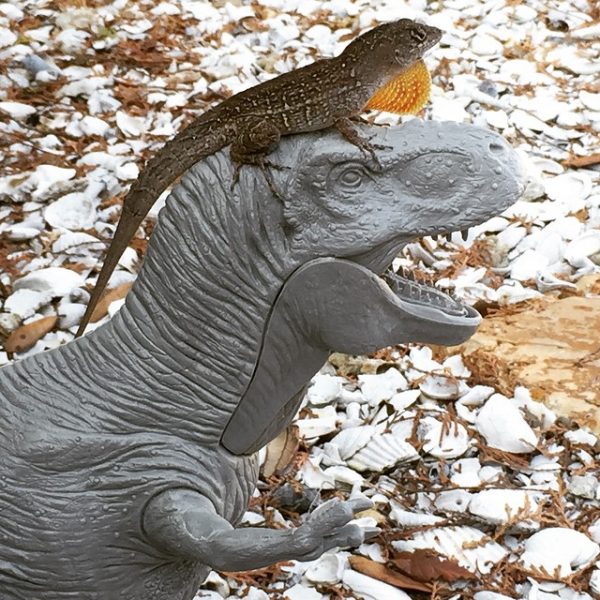 “It’s huge. And fast. We don’t know how to get rid of it and it keeps coming back to torment us,” the secretary declared.

Cheryl stared first at the lizard, then at the woman, not quite grasping the magnitude of the situation. “Wait. A lizard? All this hullabaloo is over a lizard? Why doesn’t someone just herd it out the door? Or catch it?”

“Oh, heavens no!” the secretary replied in a condescending tone most folks reserve for political imbeciles and cheeky in-laws. “Who would do that? Everyone’s afraid of it. Look at that thing. It could star in a Godzilla movie!”

Cheryl, a lifelong resident of  pest-laden Florida with a long history of lizard (and alligator and spider and cockroach) tolerance, tried not to let her involuntary eye-roll show as she quietly peeled off her suit jacket (she had, of course, dressed to the 9s for the interview) and resolutely approached the reptilian beast, her shiny black heels clicking on the tile floor like potshots.

In one fluid movement, Cheryl launched her jacket atop her unsuspecting prey, scooped up the jacket containing its protesting inhabitant, and carried the whole thing out the door, where she steadfastly marched past the chattering employees bunched on the sidewalk.

They parted like the Red Sea amid much gasping and jaw-dropping.

Cheryl proceeded to the nearest shrubbery and shook out her jacket, releasing the critter into his natural habitat. He looked extremely happy to be there.

As Cheryl turned around, neatly folding and draping her coat across her arm, she was greeted by dozens of impressed eyes. After a long moment of stunned silence, the entire audience shouted in unison, “You’re hired!”

Yep. They were indubitably impressed. Why? Because they had been shown, not told. The words innovative, assertive, and fervent suddenly had flesh and blood meaning and demonstrated all the qualities they wanted – and needed – in a leader.

Cheryl got the job. She had scads of enthusiastic new referrals and employees eager to work with her. And best of all, she was able to add lizard-conqueror to her resume.

Because she knew the power of show, don’t tell.

So dear BBFF, when has the principle of show, don’t tell been effective in your life?

In my humble but accurate opinion, it’s the best Christian Bookstore in the nation – you won’t believe their incredible selection of, well, everything!. I’ll be there at a Meet & Greet/Book Signing from 12-2 pm and would LOVE to meet you!! They have a large variety of titles from my Too Blessed to be Stressed line, and the biggest selection of inspirational everything I’ve ever seen in one store (tees, home decor, jewelry, gifts, etc). Believe me, it’s worth the trip!