Those of you with elderly parents know what a adventure it can be when you take them places. So you’ll not be a bit surprised at the challenge I encountered a few weeks ago when I took my 91-year-old mama to her best friend’s funeral. And if you know my mother, you’re already expecting the worst.

After I picked up Mama in my car, we drove ninety minutes to the out-of-town Celebration of Life for her dear friend and former next-door neighbor for nearly fifty years, Mary Gissy.

Let me say at this point that Miss Mary always enjoyed a good laugh. Having raised seven rambunctious children, I suspect it was her most effective defense mechanism. And the good Lord knows that my mama’s mission in life was always to make others smile. It was her mission way back when the Gissy’s moved into the newly sprouted Green Acres neighborhood in Starke (FL) where Mama and Daddy had just built a tiny block starter house (I was two-years-old at the time) and it’s still her mission all these years later.

Miss Mary and Mama were truly a match made in heaven. At first glance, they appeared to be oil and water. But their personalities meshed like squash and taters. If Mama said let’s go, Miss Mary was already in the car. She was Ethel to Mama’s Lucy. The same kind of different.

In recent years, as they aged, they had both left Green Acres to move closer to their respective children miles apart, but whenever they got together, as they loved to do, the air molecules sparkled with their crazy cackles of laughter. They knew how to make each other howl. Just as longtime heart-friends should. And so I know what happened next would have had Miss Mary laughing harder than anyone.

When we arrived at the church for the service (already late, as usual when Mama is present), we got out of the car and ten candy bar wrappers fell from Mama’s lap onto the floorboard. Mind you, she carries an enormous stash of snacks with her wherever she goes (in case you get stranded on a desert island, you must have a month’s supply of Reese’s Cups) and although she’d eaten breakfast right before we left, she’d apparently been sneaking chocolate the entire ride.

I ran around to her side of the car to help wrench her out and as she stood and staggered the first few steps with her cane, I was HORRIFIED to see chocolate smeared all over the seat of her royal blue pants. She had evidently dropped a boatload of chocolate crumbs between her legs and wallowed in them for the past hour and a half.

The car seat she had just evacuated looked like a constipated cow had deposited an extra large patty in sublime relief.

Oh no! The last of the crowd had already filed into the reception hall and the service was about to begin. We were late. We were discombobulated. We were humiliatingly filthy. What was I supposed to do now?

Feeling too stressed to be blessed (a little play on my book title there), I half dragged, half carried her 90-pound self into the foyer (Mama does nothing in a hurry!) and searched madly for the ladies bathroom. Commanding her to NOT MOVE, I ran inside and wet a handful of paper towels then came back to try to scrub/scrape some of the brown, embedded goo off her hiney.

All I ended up doing was smearing it around. Swell. People would just have to think she needed Depends.

Can you say humiliating?

We finally located a seat (as I self-consciously stuck to her as closely as a lovebug trying to shield her backside from inquisitive eyes) and as I helped lower her into her chair – which is something akin to guiding a falling tree – I noticed something peculiar. What in the world? Chunks of black rubber – some the size of marbles, some like hunks of gravel – were trailing behind us in Hansel and Gretel fashion, following our exact path from the door to our table. 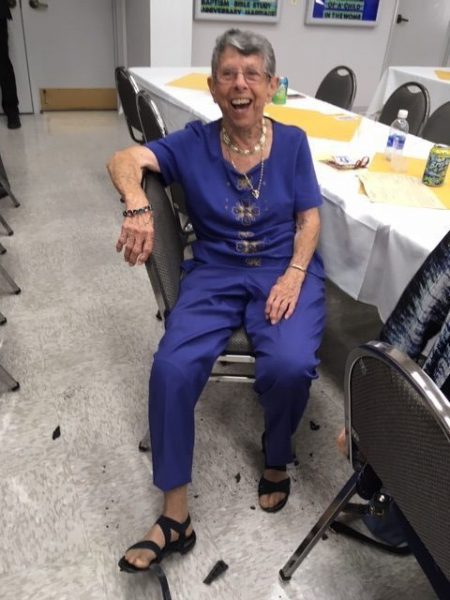 Mama raised one of her feet in the air and to my flabbergastation, half of her shoe sole was missing. The other half was hanging off in shreds. And a rubble pile of dry rotted black rubber collected under Mama’s feet as she burst into peals of hysterical laughter and swung her feet like pendulums.

Bwahahaha. “These are my dressy shoes!” Mama roared. “You should take me out more often!” Bwahahahahahahahaha.

Everyone stared. It felt like a reincarnation of Mary Richards at Chuckles the Clown’s funeral (be sure to Google that Mary Tyler Moore Show vid if you haven’t seen it lately!). Except this time Mama sat there laughing her brains out until everyone around us had to laugh too.

Despite my own horror, I suspect Miss Mary was getting a good chuckle out of it in heaven. She knew my mama better than anyone. And I’m sure she wasn’t a bit surprised. 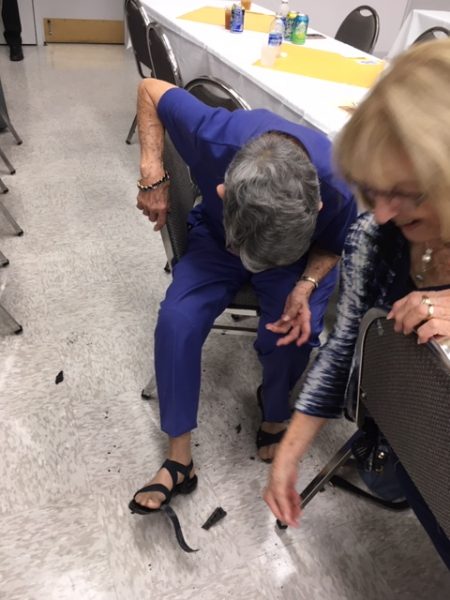 I, however, wanted to run away and hide. To leave Mama there and pick her up next week, shoeless, gooey brown britches bottom and all.

But instead I had to get down on my hands and knees – in my dry clean only dress, of course – and scuffle around the floor beneath the table like a mouse gathering cheese crumbs, finger-raking up all the flakes and chunks and shards of rubber to deposit in the nearest trash bin along with those dry rotted shoes.

And hope against hope that my dress wasn’t inching up my backside and flashing all the now hysterical funeral mourners in our vicinity.

So much for dignity.

Oh, no – Mama wasn’t the least bit embarrassed to greet all her friends from the old neighborhood afterward in a pair of old floppy sandals (at least she had those in the back of the car or she would have no doubt been happy to finish out the funeral barefooted). 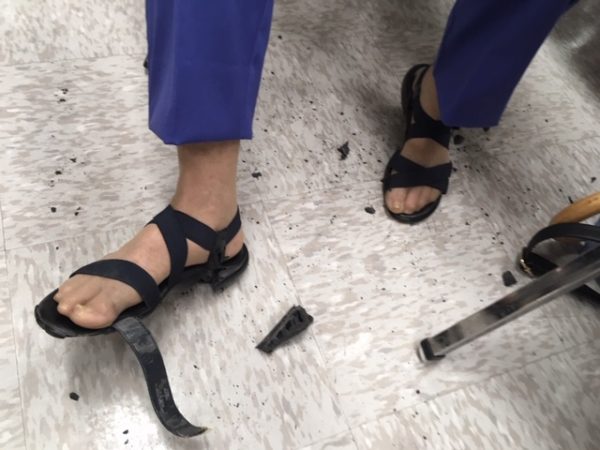 I know, I know. I should be thankful she’s still here and she’s still spunky and she still likes to laugh.  And I am. I truly am. So on to our next adventure. Or maybe that should be misadventure.

But you know what? I’m gonna have to ban those Reese’s Cups.

Say, when was your last misadventure with a family member? I’d love to hear about it!