Don’t ya just love it when something new and fun jumps right out of the Bible and God-smacks you?

I had one of those this week. It happened while I was reading Romans 16, a passage I’ve read countless times before – one of those rather mundane, drone, skim-through chapters of Paul’s greetings to folks that you and I don’t know and never will.

I was first struck by how many women Paul knew personally who were stalwart behind-the-scenes stabilizers of the early church (just like today, right, sisters?). Men seem to get most of the limelight for building the early church – and I do NOT want to take anything away from them for they certainly deserve credit where credit is due – but let’s never forget that women were important too.

The first European Christian church began with a women’s Bible study. Praying, serving, loving ladies not only helped established what became the modern church, they were the invisible glue that held it together through the centuries.

And I’m totally stoked that Paul realized that. So I reread the Romans chapter to count the women he gave shout-outs to: nine by my count. Cool.

Two of them really stood out to me.

In verse one, Paul commends Phoebe, “a servant of the church which is at Cenchrea.” First of all, that city, Cenchrea, nagged me – where have I heard that name before? Ah, yes, it was the port near Corinth where Paul got a haircut ( Acts 18:18). Must have been a humdinger of a stylist for Paul to document the occasion in the Holy Scriptures. That and this are the only two times it’s ever mentioned in the Bible.

Feel free to add that to your list of interesting Bible trivia.

Secondly, that word “servant” just begged for a deeper look. After all, don’t we all feel like servants to our churches when we commit to a ministry? Yet it does go deeper than that. The NASB interprets the Greek word “prostatis” as servant, but other translations use the word “helper” or “protector.” It also means “protectress.” I LOVE THAT.

Protectress. Roll it across your tongue with me. Kinda makes you want to roar, doesn’t it?

We women are well trained protectresses – we’ve learned how to protect our children, our spouses, our homes, our reputations. And apparently we’re also called to protect our church. Not to slam it, ridicule it, or undermine it. To promote it. To build it up. To protect it so that our body of believers can draw others to Jesus.

Great new herspective. Am I actively protecting my church?  Are you?

Thirdly, “Phoebe” rang a bell. I remembered that Phoebe is the name of the Moon Goddess from ancient Greek mythology (I’ve been fascinated by Greek mythology since childhood). Sure enough, a little research revealed that Paul’s Phoebe was likely named after the Greek Goddess Phoebe, indicating that she was probably a Greek/Gentile Christian. As opposed to being a Jew like many of the early believers.

Reading on, I hit an eyeball wall in verse 3: “Greet Prisca and Aquila, my fellow workers in Christ Jesus.”

Wait. Prisca … who is Prisca? Weren’t Priscilla and Aquila the go-to married couple in leadership who were mentioned numerous times by Peter, Mark, Paul? Sure enough, it turns out to be the same chick.

Hmm. Maybe Prisca was Paul’s term of endearment for Priscilla. They were good friends. Buds. She probably called him Paulie. (Ha!)

I can dig that. After all, I’m Debora but my friends call me Deb or Debbie. My mama calls me Debs. My man calls me Muffin Face (the romantic fool). I guess we gals answer to all kinds of names.

But my point here is that we ARE gals. Women who love and serve Jesus just as much as menfolk. And because of that, we’re important. Jesus knew that when he appeared first to his women followers after the resurrection. The very ones who didn’t run for their lives and desert him like the men did.

And apparently Paul knew it too.

Hey, I love to hear from my BBFFs (Blessed Blog Friends Forever) so feel free to comment here or via my e-newsletter or website, DeboraCoty.com. And stay tuned for a great new giveaway coming soon. 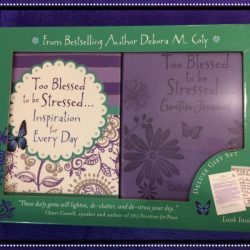 Ooh, one more exciting announcement: remember the awesome gift sets that were exclusive to Sam’s Club just before Christmas, containing my 365-day devo Too Blessed to be Stressed: Inspiration for Every Day + the matching Creative Journal?