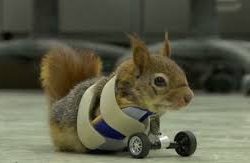 I recently saw a YouTube video featuring a young man who rehabbed a baby squirrel he found caught in a trap. Both the little squirrel’s arms were broken by the trap’s steel jaws and had to be amputated due to permanent nerve damage. But that didn’t stop the feisty furry firecracker; she never lost her incredible will to live. She was fitted with a prosthetic wheeled device, like a teensy wheeled walker, and although she could no longer climb trees, she could happily zip around the ground like her tail was on fire.

Her man kept calling her endearments like, “My little sweetie” and “My darling” throughout the video. Awww. That in itself lodged a lump in my throat. For I remembered all too well the time when my heart, too, belonged to a rodent.

His name was Ernest P. Squirrel (named after the late great Jim Varney’s goofy character, Ernest P. Worrell, remember him?). Ernest came to us not from steel jaws of death, but feline jaws of death. My calico had cornered baby Ernest in a corner of our garage, intending to have him for lunch. And I don’t mean as a guest.

Ernest’s earnest and terrified squeals brought me out of the house, where, horrified that my cat was acting so, well, catlike, I stepped between the hungry aggressor and her victim. In a flash, that teensy squirrel dashed up my leg – which does bear an uncanny resemblance to a tree trunk – and perched on my thigh, his sharp little claws clutching my jeans.

He stared directly into my eyes, his tiny chest heaving.

I guess he came to the conclusion that I was a better fate than the cat, for he let me pick him up, cuddle him to my chest, and take him into the safety of the house. And there he stayed for the next four weeks, riding around in my pocket curled up for a snooze or sitting on my shoulder, burrowing deep into my hair.

Ernest ruled the roost while growing bigger and stronger on cat’s milk from an eye dropper. 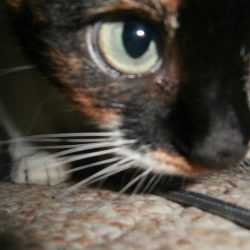 Yep, I said cat’s milk. It’s what the vet said to give him because it agrees with squirrel innards and their nutritional needs better than cow’s milk. I just can’t figure out how they milk a cat. Try to picture that, will you? If you’ve ever tried to bathe a cat, you know it would be like trying to tackle the Tasmanian Devil. Do they employ little kitty shackles, claw mittens and snout muzzles while someone squeezes teensy little utters toward an itty bitty bucket?

And can you believe cat’s milk comes in handy juice boxes at the grocery right beside the evaporated milk? I kid you not.

Something’s ironic about keeping a squirrel alive on cat’s milk when a cat is what almost did him in. But that’s not the point I want to make here. 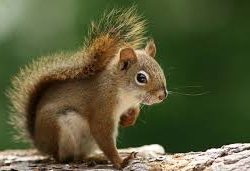 Prior to raising Ernest, I had unsuccessfully tried to rescue two other infant squirrels – one had been ousted from his nest by a hurricane and the other was ushered out by a neighbor’s cat. In my ignorance, I fed the latter one cow’s milk and he only lived a few days. Because the hurricane that stranded the former also closed grocery stores, the only option we had available was human breast milk, which my daughter-in-love graciously donated after nursing her newborn son.

Sadly, it just wasn’t the right formula for wee rodents.

So this, my patient friend, is finally my point: The only way we can live and flourish is by a steady diet of the right kind of nourishment. In Ernest’s case, cat’s milk. In our case, the milk of the Word. Papa God’s Word. Every single day. To thrive, we need to digest the equivalent of three square meals a day.

And we need to consume it ourselves, not simply accept the wad that someone else has already chewed. Soul nourishment is even more important than physical nourishment. Because it affects our eternity.

When he reached a healthy weight, we released Ernest P. Squirrel into the woods from whence he came. I like to think he’s still out there somewhere, regaling his grandsquirrels with stories of the crazy lady who once called him, “Sugar dumpling” and secretly carried him to work at the hospital in her pocket, where she fed him in a bathroom stall every 3 hours. (I finally got caught when Ernest crawled out of my pocket onto the hand therapy table while I was working with a patient. Surprise! I thought my boss was going to have a cow right then and there. But that’s a story for another time … )

I still have the stuffed squirrel they presented me at the company Christmas banquet that year.

I’d love to hear the ways you get your daily spiritual milk. Won’t you take a moment to share with your community of BFFs (Blessed Friends Forever)? 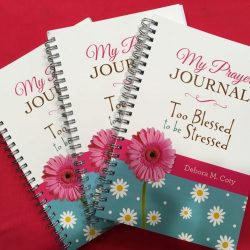 Hey sister, if you need a boost for your daily prayer/Bible reading time, check out my Too Blessed to be Stressed Prayer Journal (available on Amazon.com or CBD online, and I hear it’s now appearing on many Choice book racks); it has great prayer starters and prompts for Bible study and journaling – designed to fit in well with your crazy-busy day.

Oh, and this is the last call for beta readers who’d be willing to read and review Too Blessed to be Stressed for Moms, which is releasing this fall. Give me a holler and state whether you’d prefer print or e-version. Many thanks!