I returned on Monday after a three-week trip, starved to devour the nourishing presence of my grands.

I’m spoiled, you see, by the fact that they live next door, and I’m blessed to be part of the everyday lives of my twin almost 3-year-olds and their 7-year-old brother. (I also have another 1-year-old grandbuddy who lives an hour away.) Loving on them becomes addictive.

Three weeks separation was much harder on me than I expected, and it was hard – I was soon to find out – on them too.

I had no sooner walked through their door than three little warm, squishy entities attached themselves to my legs and torso, much like the scene in The Incredibles (one of my all-time faves; can’t wait to see the sequel!) when Mr. Incredible is attacked by the adhesive blobs shot from cannons that attach themselves to his person and expand until he is completely and utterly immobilized.

And there they remained until I painstakingly peeled them off when it was bedtime. Bree, my littlest girlfriend whom I call Sweet Pea, insisted that I sit by her at the dinner table and kept her teensy arms wrapped around my neck in a chokehold the whole meal so that swallowing was impossible.

First time I’ve ever squirreled that much food away in my cheeks and then swallowed the whole thing in one big gulp at the end.

I really didn’t mind; wearing my baby-loves as a second skin was incredibly refreshing to my parched Mimi-heart.

So it came as no surprise when I ran across research conducted by the Women’s Healthy Aging Project in Australia, proving that grandmothers who helped with childcare at least one day a week stay sharper longer. Yep, they stay mentally and physically healthier just by spending time with their grands, and lower their risk of developing dementia and Alzheimer’s disease.

That’s probably because you have to keep your wits about you when Junior uses every pillow and couch cushion from the entire house to build a rocketship in the backyard dirt and when you have to problem-solve how to remove the contents of your rock garden from inside the piano.

Not to mention that chasing the little rug-rats around for a few hours a day is critical to menopausal triathlon training.

And we menopausal women need all the help we can get. When I turned 50, I asked Papa God to send me more hours in the day to get everything done. He sent me menopause. Now I have half the stinkin’ night too.

One caveat: this same study revealed that grandmothers who babysit five or more times a week scored lower on cognitive exams versus those who babysat once a week. Hmmm. Maybe they were preoccupied trying to figure out how to get the cactus quills off the C-strings.

Regardless, the conclusion is that we need them and they need us. 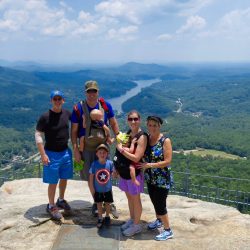 Who else will read “Duck and his Friends” 4,000 times in a row, or allow sticky little fingers to play flop-flop with the Dumbo wings on the backs of your arms?

Nobody but dear ole Grandma, Mimi, Gigi, Grammy, or Nonny.

Tell me, dear BBFF, what memories do you have of the special things you did with your granny?  I’d love to hear them!