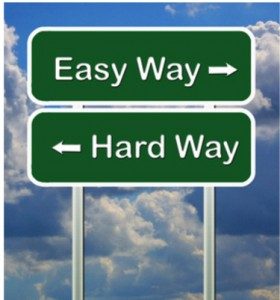 Something very interesting caught my eye the other day while I was enjoying a little He & Me time with Papa God.

I was reading the story of the rich, young ruler in Mark 10:21 and noticed something not included in the other two gospels that contain this account of the well-to-do young man who did all the right things – kept the ten commandments, loved his neighbors, probably even flossed daily.

When this “good” fella (by the world’s standards) asked Jesus what ELSE he should do to earn eternal life, Jesus shocked the Armani sandals right off his feet by asking him to do something pretty dang hard in his day and even in ours.

“Sell all you possess, and give it to the poor …”

You can just picture the rich guy’s face falling. He was expecting to hear something like, “Give an extra shekel to every beggar you pass from now until Easter.” Or maybe “Go to church six times a day to show your incredible devotion to me.” Or even the ultimate in self-sacrifice,  “Take over permanent 2-year-old nursery duty at the temple.”

But wait. The thing that slapped me upside the head happened after the dude asked his question and just before Jesus answered.

Wow. Marinate on that a minute.

Jesus LOVED this guy, but still asked him to do something hard. Really hard. Something that, in the guy’s way of thinking, was downright impossible. He was probably majorly attached to that red convertible.

The litmus test for loyalty often starts with our wallets.

Sadly, he failed the test. He chose poorly (to quote my favorite Indiana Jones movie). When it was all or nothing, he took all.

But back to my point: Could it be that Jesus does the same for us – loves us to pieces but still asks us to do something really, really hard?

I think Mother Teresa, wilting away, serving in the festering, disease-ridden slums of India would have known the answer to that.

And Corrie ten Boom, who barely survived a Nazi concentration camp because she chose the hard way of showing Papa’s forbidden love in hiding Jews.

And Joni Eareckson Tada, who intentionally takes the hard road every single morning she awakens as a quadriplegic after a tragic 1967 diving accident, intent on sharing Papa God’s mercy and grace with the world rather than hide away in the comfort of her home (www.joniandfriends.org).

Or Katie Davis Majors, the American teen who went w-a-y out of her way to do things the hard way by choosing to live in Uganda and adopt 13 daughters in order to share Papa God’s love firsthand to those living in poverty (www.kissesfromkatie.blogspot.com).

So. Who are we missing?

What hard thing might our loving Savior be asking of us this very day?